9 out of 10 Beagles prefer French roast

I have to be honest with you my friends, after many hours of extensive research (2 whole hours) I just can’t wrap my head around this topic. I’ve flipped through page after page of neurophysiology, human anatomy & physiology, and re-runs of Bill Nye the Science Guy. All the while this topic mocks me from across the room, laughing and pointing at me while I stand vulnerable with my intellectual fly open. Yes my friends, the question of why we yawn is quite the physiological puzzler. So allow me to share what I’ve learned so far.

PANDICULATION! (get your minds out of the gutter…I was here first)

Pandiculation refers to the act of yawning and stretching at the same time. It’s that moment we’ve all witnessed when a dog first wakes from his nap. They’ll stretch out onto their paws in that awkward straddle that always reminds me of yoga on stilts. They then open their jaws impossibly wide and yawn. We may not be as cute as our fury friends when we do this but all the tell tale signs are there. Also, have you ever noticed how unsatisfying a yawn without stretching is? In fact, it is suggested that this is one of the main advantages of this activity. What other involuntary responses to stress, fatigue, and boredom do you know of that simultaneously stretch your jaw, tongue, throat, and eardrums aside from dry heaving?

So what does yawning do for us?

Here’s where the theories rear their ugly, wishy-washy heads. As you know, it has always been my mission to give you the facts – raw, unfiltered, with no artificial fillers or sweeteners, but surprisingly, there are more theories on this subject than Rihanna has hairstyles. So here are my top 3 favorite explanations:

This charming little theory has been circulating like an urban legend for eons. It suggests that yawning is triggered by a shift in the concentration of CO2 in the blood. Remember that breathing is a kind of constant exchange of oxygen for CO2 and it is just as vital to rid the body of the CO2 generated during the daily metabolism of our cells as it is to take in oxygen. So the idea that the sudden and deep inhalation of air taken in during a yawn is the body’s way of self-regulating for these shifts makes perfect sense to me.

Upon experimental investigation with test subjects however, increasing oxygen and reducing CO2 seemed to have no measurable effect on the incidences of yawning. Sorry CO2, you can take away our polar caps but not our right to yawn.

This theory suggests that yawning is a means of cooling off the brain. As a fan of Sci-fi I dig this explanation because I like to imagine the brain overheating like a high-tech super computer developed in a secret government lab. So in order to keep our test tube, android bodies from nuclear meltdown we have to yawn occasionally.

So it’s not more oxygen that our yawns are bringing in but cooler air to lower our body temperature. When you think about it, the hypothalamus of the brain regulates body temperature anyway. Yawning could just be a sign that our internal thermostat is kicking in. Since body temperature fluctuates with our sleep cycles, it is believed that cooling off the brain heightens alertness and mental efficiency. In fact Alertness ties in beautifully with our third and final explanation….

This is my favorite (my blog defies science and thus picks favorites). This theory argues that yawning is an activity evolved to promote not only alertness but a kind of group vigilance.

fun fact – I yawned approximately 17 times in the process of editing this article.

From the moment we wake our inner clock is ticking, counting down the hours until sleep. As the light changes throughout the day, adenosine (neuron inhibiting, smooth talker that gets your central nervous system into bed) accumulates in our cells like sand at the bottom of an hour glass. Your awareness to stimuli, reaction time, and perception of subtle changes in the environment becomes muffled and muddy. Staying vigilant is crucial in a prehistoric wilderness of dire wolves and sabertoothes that think of homo sapiens as walking, P.F. Chang appetizers (I like the spring rolls). 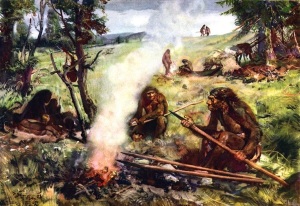 So there you are, standing guard by the cave with your hairy arms and caveman abs. Having just chowed down on grilled mastodon your eyes start to droop. Your respiration shallows and your body temperature fluctuates, but just then, you hear bushes rattle in the distance. The sudden sound makes your shoulders jump (known as a hypnic jerk), jolting you back into consciousness. You smell the distinct musk of a predator dangerously close by. Reaching for your flint tipped spear you start to…yawn? The other members of your tribe also reach for their weapons. Women gather up the little ones and they too begin to yawn (a phenomenon of contagious yawning observed primarily among relatives and close friends rather than strangers). The yawning stretches the jaw, tongue, eardrums, and throat. Arterial blood flow is increased, allowing the brain to cool, prompting arousal just in time to perceive the threat of wolves approaching…or so the theory goes.