when performing CPR make sure the camera gets your good side.

I don’t know about you, but I’ve spent far too many precious Saturday mornings renewing my CPR certification, kneeled over a motionless, plastic manikin. What does CPR actually accomplish? What purpose does locking lips with a complete stranger and pushing down on their thoracic cavity (like it owes you money) serve anyway? Let’s dive into the physiology of CPR shall we.

The ultimate purpose of CPR (cardiopulmonary resuscitation) is to re-oxygenate the blood via the lungs and circulate that blood throughout the body by manually compressing the heart. Ideally, the re-oxygenated blood will reach the brain and restore consciousness.

First let’s take another look at the lungs…

Lungs are an elegantly simple respiratory organ (as organs go). From a strictly mechanical point of view, lungs are just big sacks of air. Those sacks have a remarkably air tight seal. In fact, if you perform the CPR breathing technique correctly you should be able to watch the victim’s chest rise with each full breath. That’s why we pinch the victim’s nose, tilt the head back with the chin, and form a seal with our hands around their mouth,  then blow. We are filling the lungs with air.

No, I didn’t say oxygen. I said and meant “air.” Oxygen is a pure, gas element but human beings breath a mixture of gases. So when we give the victim breaths we want them to get the oxygen they need but they are also getting the leftover CO2 from our cellular metabolism, and all of the nitrogen, argon, etc. that we took in from the atmosphere. The point I’m making is that providing the victim with adequate oxygen with just your own lung power is a lot of work and pretty inefficient. You’re saving their life but when the EMTs do arrive they will likely provide the victim with 5-10 liters of O2 per minute from a respirator.

What’s with the chest compressions?

I don’t expect everyone to have as much school spirit about the human body as I do, but the heart is so well constructed, so intelligently engineered that even when it stops beating on its own it can still be used to pump blood through the body. Your heart contains chambers and valves that allow blood to flow in one direction with each compression while preventing that volume of blood from flowing backwards. That’s what a pump does. A bicycle pump let’s you exert downward force on the handle to force air directly into the tire without taking air away from the tire when you draw the lever back. So as you exert force on the breast plate blood from the heart will continuously make its way throughout the body with each compression.

So we are delivering two breaths (for an adult) every 30 chest compressions to recharge the blood with oxygen and pump it back throughout the body. We perform chest compressions at a rate of 100/minute or just faster than 1 compression per second because we are simulating a beating heart. If you need to find a rhythm think drum & bass techno or Cuban dance mix not smooth jazz.

A Race against time…

There’s a good reason why breathing is involuntary. Oxygen keeps our cells going. Forget about Kale salads and protein bars. The moment our tissues are cut off from an adequate O2 supply they begin to die (hypoxia). This is why CPR must be instinctive and started the instant no pulse is felt in the victim because the loss of organ function (especially) the brain can happen in minutes.

It won’t work without an AED 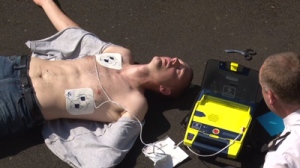 CPR can be a life saver but…not all by itself. There’s a reason the victim’s heart stopped in the first place and you can’t stay on your knees doing compressions forever. Typically there is some form of short circuit in the vital electrical activity of the heart that governs a normal heart beat. In a normal, healthy, jazzercizing heart an electrical signal forming at the top of the heart (at the SA node) contracts the upper atrial chambers, forcing the blood into the lower ventricles (bottom chambers). When that signal makes its way down the heart to the AV node, the ventricles contract, releasing blood into both the body and the lungs. An AED is used to jump-start the heart’s electrical system in an effort to stimulate the nerve impulses of the SA and AV nodes once more. Unless you’re a Jedi knight you just can’t do that with your bare hands.

Despite what you see in the movies, any victim who receives CPR is not just going to snap out of it and take the rest of the day off. They will 100% of the time need medical attention. In fact, while you’re preparing to do CPR someone should be calling 911.

Hopefully you guys will never have to use it. Let’s be honest, the thought of having to do perform CPR on a real person scares the Hell out of me. Stay curious, stay classy, and never stop learning my friends 🙂 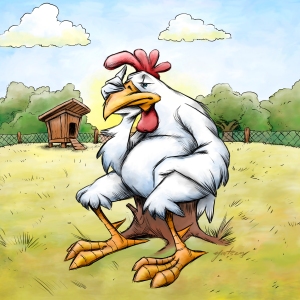 Before we get started there is something you need to accept about he human body…that it is and always will be an elegant and extraordinary mystery. Whether you’re a sleek and sexy, Ashram Yoga instructor, a chiseled cross-fit enthusiast with triceps like boulders, or a 300 lb chain smoker with a mild cinnamon bun addiction your body is truly amazing. I say that with confidence because with all of the things that could go wrong with our bodies, for many of us it is “not normal” to be sick. Your body simply does it’s job and we can only grasp what a remarkable job it does when something goes wrong.

So what can go wrong?

Let’s say you robbed a vengeful fortune teller of $2,000 dollars at a poker game in Atlantic City. The next day you woke up to find that a deadly curse had been placed on you. In a matter of weeks you will begin to lose weight. You will suffer from swelling, weakness, and pain in your limbs. Depression eventually takes hold of you and you lose the capacity for empathy. Tragically, lesions begin to form in your brain resulting in epileptic attacks. Eventually your suffering ends in madness and heart failure. YOU ARE DOOMED…unless you find the anecdote. The only thing that can stop the curse before it starts, brown rice. Wait…WHAT?!  Let me explain..

You see, in Southeast Asia millions of people truly did suffer from a curse. It’s name was Beriberi, and it refers to a collage of symptoms affecting neurological and cardiac functions in many of the notoriously destructive ways I’ve already described. Then along came a crafty, Dutch physician named Christiaan Eijkman who sailed the ocean blue to Indonesia in search of answers. One day that answer came in the form of a question; “why aren’t the chickens sick?”

Beriberi was everywhere. It affected the soldiers, the villagers, and even their farm chickens. In fact Eijkman had a few chickens loitering about his clinic with similar symptoms. Well eventually he started noticing that a few of the chickens seemed to be recovering. So what changed for the chickens? Their diet changed.

The camp where Eijkman was staying had a new cook who decided that rather than waste the good rice on the chickens he would just feed them the regular ole brown rice.

The Dutch had taken over Indonesia at the time (as in the Dutch-East India Company) and they ate polished white rice (rice with its golden, outer husk removed) along with the locals. White rice has a longer storage life and when you live in a hot and humid climate in a time before water-proof, plastic containers or refrigeration, the storage life of your food is everything.

Unfortunately, when you remove that outer husk you shed the bulk of the nutrients in the rice. Our guy Eijkman proposed that there was a mystery nutrient that was “vital” for maintaining normal physiological function. That nutrient would later come to be known as thiamine (vitamin B1) an essential amino acid your body needs to build protein and carry out normal ATP synthesis and a grocery list of metabolic pathways.

When the Europeans would sail back home with symptoms of Beriberi, people would naturally suspect that they had brought some exotic, tropical disease back with them. It was Eijkman who offered the insight that Beriberi was caused by an insufficient diet and not an infection. Eijkman would share a Nobel Prize for medicine with another nutritional hero named Sir Frederick Hopkins who demonstrated through experimentation that  without the yet unidentified “accessory food factors,” proteins, carbohydrates, fats, and minerals could not support normal growth in test animals. Thus our understanding of vitamins was born from chance, scientific observation, chickens, and an Indonesian cook whose name has been lost to history.

The story of Aspirin is an old one. I know you’re probably tired of

giving credit to the ancient Greeks for every little thing just

because they wrote everything down, but as early as 5th century B.C.

good folks like Hippocrates, in their flowing togas were describing

fast-forward to the 18th century where scientist representing three

corners of the globe were playing around with salicin, as if it were

identified the compound salicin as the active ingredient to that wacky

Willow powder I mentioned earlier. Back in France, Henri Leroux was

figuring out ways to produce larger, biggie-sized quantities of the

compound. The cool kids (scientists) figured out along the way that

salicin gets it’s medicinal potency from being converted into

salicylic acid (its metabolite) by the body. Though this form can also

Turning down the volume….

you in another article). Let’s just say that for many of the chemical

signals that our cells produce there is usually a mechanism to

interfere, inhibit, or amplify that signal. In the case of pain our

body really wants to get that message across loud and clear. There is

a family of cellular messengers called prostaglandins that, among other

things, switches our neurons on to pain. The enzyme cyclooxygenase

(COX-2) increases the production of these pain happy molecules during

inflammation. Salicylic acid blocks the expression of COX-2 (as in

over the logs so the fire never gets a chance to start.

The trouble with Sally is…

Despite its magical pain relieving and anti-inflammatory properties,

salicylic acid could be pretty harsh on the stomach lining. In fact, a

lot of people suffered from intestinal bleeding after taking the

powder (Now that’s harsh). Along comes this hot-shot chemist out of

Germany, Felix Hoffman who decides that it’s the “acid” portion of

salicylic acid that’s the problem. After performing a little

user friendly compound that his employer Friederick Bayer & Co would

later market as “the wonder drug.” When the biochemical nerd dust

settled we were left with Acetylsalicylic acid (ASA), or Aspirin.