Just couldn’t help myself..you know how it is. Magically Yours, Forgotten Physiology 🙂

Surprising isn’t it, that we’ve never talked about the kidneys until now. Well sure there were a few times that I might have mentioned them in other articles, but kidneys should never play supporting roles. We’re not talking Mary Kate and Ashley. No sir, the kidneys are Siegfried and Roy, center stage in Vegas with white tigers jumping through rings of fire.They deserve the full, Maxim magazine centerfold treatment. 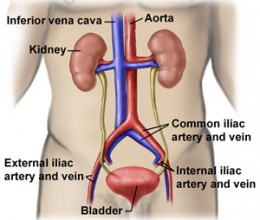 CRAZY SIMPLIFIED – aorta branches to feed kidneys blood which do their filter thing, make the pee which drains through ureters and empties into bladder. Nothin but net!

Let me level with you for a minute. Urine…it’s nothing to be afraid of. It is the ultra filtrate of blood plasma. “Pee” is the result of a highly specialized filtration system, the kidneys, receiving a rich blood supply from the abdominal aorta. They selflessly separate the good stuff from the bad and send the filtered blood, squeaky clean to the vital organs. What waste products are left over leave the body as urine. A large component of urine is urea which is a substance representing the end of nitrogen metabolism. It’s actually odorless but when the stuff comes into contact with water or water vapor we get ammonia from the reaction which definitely has its own pungent, sweaty gym sock charm. So If I were ever tempted to give you the cliff notes summary of what the kidneys do I would say that they remove soluble waste or excess metabolic byproducts from the blood by concentrating them into urine.

The show kicks off with the renal artery which, branching off of the abdominal aorta, supplies blood to the whole operation (the kidneys). Like all fashionable arteries it branches into smaller vessels. STOP

[This is where we enter the microscopic neighborhood of the nephrons, the thousands of tiny functional units that make up the plumbing and wiring of the kidneys. Surprisingly, what does the work of each kidney is the collaborative effort of thousands of tiny nephrons. Your key words are: Tiny and Thousands. Please, please keep this in mind because these itty bitty nephrons perform some major league physiology. Ok back to the show.]

Those arteries having branched until they can’t branch any more now make up the afferent and efferent arterioles. These form a kind of yarn ball of capillaries called the glomerulus. The glomerulus forms such a fine mesh of blood vessels that not only are blood cells separated out of the blood but just about any substance exceeding a particular molecular weight to include most plasma proteins. Only things like water, sodium, the occasional glucose, and something called urea are all that slip through the gate and slide down the drain. Now that’s IF everything is working properly. This mesh of capillaries sits in a receptacle formed of cells called the Bowman’s capsule, which is kind of like the bowl basin of the sink. 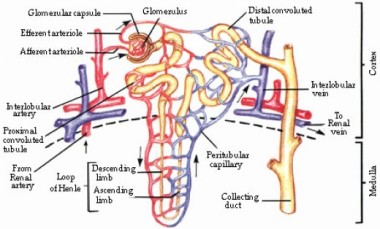 nice diagram right…took some serious google image surfing for this baby. Oh how the muscles burned!

Ok so blood has passed, Brita filter like, through the gates of the glomerulus, but that was a nonspecific filter. Now we’ve entered the world of reabsorption which is way selective. To put this into perspective we’ve gone from the freckled, learners permit sporting, ticket stub tearer at the movie theater to the veteran TSA agent with white gloves, only 4hours of sleep, and an itchy trigger finger. When it comes to letting substances back into the blood post filtration, the body takes ONLY what the body needs (sodium, potassium, chloride, bicarbonate, glucose) any access gets the royal flush (secretion). When it comes to things like sodium there’s a combined effort between crazy natural forces like passive diffusion via osmosis and whatever mood our adrenal cortex is in. Let’s say it’s Monday afternoon and the body says “man, I sure could go for some more sodium.” So your adrenal cortex will secrete aldosterone which is like a chemical text message that directs the cells of the proximal convoluted tubule to absorb more sodium.

The reabsorption of water is completely dependent on sodium reabsorption. This is where the whole osmosis thing comes into play because water is naturally going follow the flow of sodium ions, moving in the direction of higher concentrations, Tai Chi like to restore osmotic balance. Now of course, increasing water in the vessels (fluid volume) increases blood pressure. So if A+B=C then increasing sodium reabsorption increases blood pressure.

A change in blood pressure is sensed by the cells of the juxtaglomerular apparatus (another portion of the nephron) which secretes renin. Renin converts the protein angiotensinogen into…wait for it…angiotensin. This is the substance that signals the adrenal cortex to do its aldo thing in the first place. Sounds like one of them crazy feedback loops to me (another article I promise).

Yes, your mind does play tricks on you. There is this clever thing that your hypothalamus does in response to high sodium concentrations in the blood. It tells you to drink more water. Meanwhile, it signals your pituitary to secrete ADH (antidiuretic hormone) which tells your distal convoluted tubule to reabsorb mas agua as well (my hypothalamus is bilingual BTW) rather than just dump it down the drain (excrete in urine).

No, it’s not a 700ft water slide where they take your picture as you plummet half naked on a large rubber inner tube. It is the section of the nephron leading from the proximal convoluted tubule to the distal convoluted tubule and it represents some pretty badass architecture so show some respect! It is the sinking, looping construction of the Loop of Henle that allows urine to concentrate sodium, potassium, and chloride ions via a concentration gradient which allows water and valuable ions to be reabsorbed. This however, should be an article all to itself so..you may want to give this the Wiki treatment.

Ok so we came, we partied, we danced all night, and now the kidneys are saying “everybody out!” This is where the body rids itself of all those high and low molecular weight substances that got the reabsorption shaft (excess H2O, sodium, and urea/nitrogenous wastes).

Now you are probably saying “whoa now, there are way more substances that end up in urine after reabsorption.” Ok, there is a threshold that the kidneys reach. For example they reach a maximum capacity for how much glucose they can filter at one time and yep, the stuff slips through the glomerulus and if that concentration is high enough then the loop of Henle just doesn’t have the molecular horse power (energy) to pump glucose back into the blood.

And the moral of the story is….

Blood enters the kidneys to be maticulously filtered by thousands of microscopic, fancy pants structures called nephrons which filter soluble and insoluble substances from the blood, reabsorb vital substances like sodium, water, and glucose depending on the body’s need for it, and secrete excess waste by concentrating it into urine which flows through the ureters and empties into the bladder for the royal flush.

What’s that…you say there’s more to it than that? You bet your efferent arterioles there’s more, but for now stay classy, stay curious, and never stop learning my friends 🙂