What makes this wiseguy think he could possibly possess the wealth of knowledge to cover a subject as familiar, as fundamentally elemental as breathing? What nerve. What raw, untamed, audacity, arrogance…courage (please ladies, try to focus). Yeah, I’m kind of excited too. Let’s get into it! 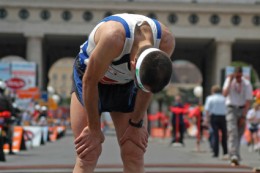 I felt the same way when I lost my tiny car in the Disneyland parking lot.

Sorry, you won’t find some dusty ole “from the top” general biology review about the way in which terrestrial organisms evolved to tolerate and then utilize oxygen in their metabolism on here. Who has time for that? (that’s another article) No sir, we’re focusing this talk on human physiology. It’s all about us baby, the tool users, opposable thumbs waved high…USA! USA! USA! Sorry. Ok, so my grasp of comparative anatomy is severely limited but the nuts and bolts of the human respiratory system will just as easily huff, puff, and blow your mind.

The complexity of breathing is really a matter of what perspective you are looking at it from. It has an anatomical side, a fluid dynamics aspect, and a biochemical aspect. Well hell, let’s just chat about them all…just a little, so they (my science critics) can say that we tried 😛

A Word or Two about Biomechanics…

We move air in and out of our lungs by changing the shape of our diaphragm muscles which get their orders directly from the medulla oblongata of the brain (which is always fun to say). The muscles contract, pull air in like a dirt devil vacuum, and we inhale. When the muscles relax, or flatten and push air out like really ugly bag pipes, we exhale. That is breathing from a basic mechanical point of view, but I know that won’t satisfy you will it? Hellz to the no! Let’s talk about gas exchange.

I know it’s a creepy diagram but boy howdy do I love that sweater!

What you should appreciate about the lungs as organs is the way in which they interact with the external environment. They are not only exposed to the air but are able to manipulate it in such a way as to allow the oxygen component of the air to diffuse into the bloodstream by way of the capillaries. To understand the diffusion of oxygen into the bloodstream you must visualize the way in which the airways leading to the lungs branch and articulate into smaller and smaller vessels. Our respiratory anatomy really reminds me of the root system of a cedar tree. From our mouths the air flows down our trachea (wind pipe), which splits at a fork in the road at our left and right lungs into two primary bronchi. The bronchi of each side (feeding each lung) spread out and branch until they can’t branch any further.

What Rhymes with Alveoli? 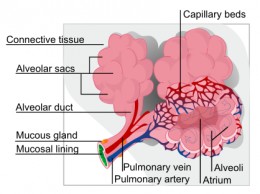 you’ll find these handsome devils at the very ends of our bronchioles.

If we took our hypothetical magnifying glass and looked at the inside of the lungs…got up close and personal at about 400 – 500x magnification, then we would be able to see the point where the bronchioles branch no further, the alveoli. These are tiny, no seriously, TINY sacs of tissue covered on all sides by blood rich capillaries. This is the site of gas exchange, where the vessels have branched down so thin that there is a single layer of red blood cells ready to accept molecular oxygen as it diffuses from the air space of each alveolar sac. Those red cells exchange CO2, bound to hemoglobin molecules, for that sweet sweet oxygen

The capillaries that transport deoxygenated blood to the alveoli are fed by the pulmonary arteries and the capillaries siphoning oxygenated blood away from the alveoli to the heart are fed by the pulmonary veins. The heart feeds the blood supply to the lungs and receives freshly oxygenated blood from the lungs to pump to the rest of the body. So it is certainly no coincidence that your heart and lungs are anatomical bunk mates with the left and right lung literally draped around the heart like a magician’s cape. Also, remember that we are not just bringing oxygen into our body but letting carbon dioxide (which can be thought of as spent air) out of our bodies. So you should have some appreciation at this point for how well our bodies do this “simple” task 24/7 without mixing the good air with the bad or as Woody from Toy Story would say “poisoning the water hole.”(honk if you like obscure Pixar references)

I could probably go on and on about the respiratory system and shifting oxygen dissociation curves but your eyes are probably glazing over about now and I’m missing a Burn Notice marathon. So stay classy my friends and never stop learning.